Meeting point with the tour guide and escort will be out from the Acropolis metro station at 10.00 p.m.. 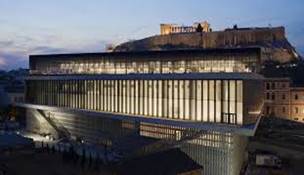 The Acropolis Museum is located in the historical area of Makriyianni, southeast of the Rock of the Acropolis, on Dionysiou Areopagitou Street, Athens. It is only 300 metres from the Acropolis and approximately two kilometres from Syntagma Square, the main square of the city of Athens. The Museum entrance is located at the beginning of the pedestrian walkway of Dionysiou Areopagitou Street, which constitutes the central route for the unified network of the city’s archaeological sites. The Acropolis metro station is on the east side of the Museum site.

Starting our tour of the museum permanent exhibition, an ascending, wide glass-floored gallery houses finds from the slopes of the Acropolis. The occasionally transparent floor provides a view of the archaeological excavation, while its upward slope alludes to the ascent to the Acropolis. 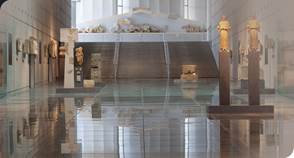 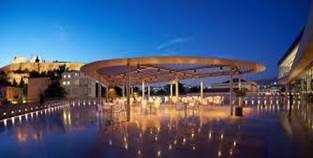 -Archaic is the period throughout the 7th century BC, until the end of the Persian Wars (480/79 BC). This period is characterized by the development of the city-state and the transition from aristocracy to tyranny and, eventually, democracy. It is also characterized by great achievements in the economy, art and intellectual life.

In the Archaic Gallery, for the first time, we will have the opportunity to view exhibits from all sides as three-dimensional exhibits. With the benefit of the changing natural light, we will be able discern and discover the delicate surface variations of sculptures and select the vantage point from which to observe the exhibits. 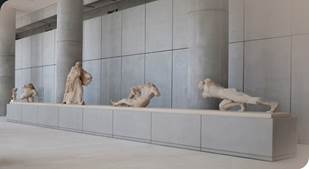 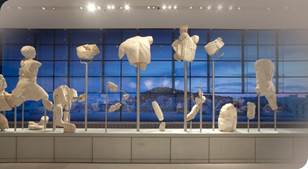 In the south side of the Gallery, depictions of young women (the Korai), the horse riders (the Hippeis) and many other provide a striking picture of the Acropolis in the Archaic Period.

-Once the Sacred Rock had been cleared of the ruins left behind from the Persian Wars, the Athenians quickly repaired the ruined temple of Athena Polias and continued their worship. A new temple was not built on the Acropolis until the middle of the 5th century BC. At that time, Pericles launched a new construction program, which began in 447 BC. Architects Iktinos and Kallikrates designed the Parthenon, while for the carving of the sculptures Pheidias collaborated with his pupils Agorakritos, Alkamenes and other great sculptors and painters. The temple, dedicated to the Athena Parthenos, was constructed in 15 years. Pheidias himself created the gold-and-ivory statue of the armed Goddess which adorned the cella interior.

Moving to the Parthenon Gallery we will see the Parthenon architectural sculptures, namely the metopes, frieze and pediments, were made of Pentelic marble and embellished with the addition of metal attachments and paint. 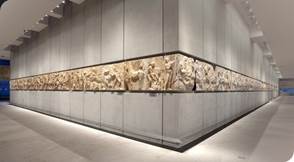 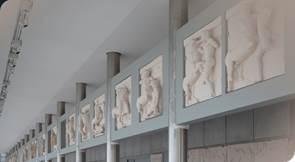 The descent from the third floor back to the first floor, to the last gallery of the Museum, affords views of unique works that became prototypes for subsequent periods from antiquity to today. For the first time ever, it is possible to view the coffered ceiling of the Propylaia and the sculptures from the parapet of the temple of Athena Nike, and finally, the Caryatids – or Korai of the Erechtheion at close proximity on the balcony overlooking the Gallery of the Slopes of the Acropolis. The main monuments that constitute the Classical Acropolis are the Propylaia, the temple of Athena Nike and the Erechtheion. 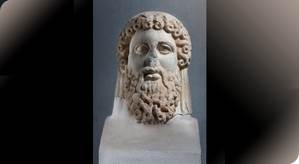 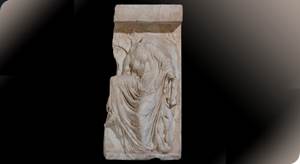 The Propylaia, the monumental entrance to the Acropolis, were built in 437-432 BC, following designs by the architect Mnesikles, in order to replace the earlier gateway (the Archaic Propylon). In 427-423 BC, the temple of Athena Nike was built, perhaps by the architect Kallikrates, on the bastion southwest of the Propylaia, to replace an earlier small temple on the same site.

The Erechtheion is the last of the Periclean buildings. Construction began during the Peace of Nicias (421-415 BC) and ended after 410 BC. Especially about the area around the Erechtheion was considered the most sacred of the Acropolis. The Erechtheion was a complex marble building in the Ionic order, an exceptional artwork. The eastern part of the Temple was dedicated to Athena, whilst the western part was dedicated to local hero Boutes, Hephaistos and other gods and heroes. Thus, the Erechtheion was a temple with multiple functions, housing older and newer cults, and the site of the ‘Sacred Tokens’, the marks made by Poseidon’s trident and the olive tree, the gift of Athena to the city of Athens. 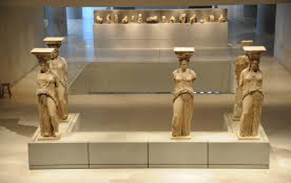 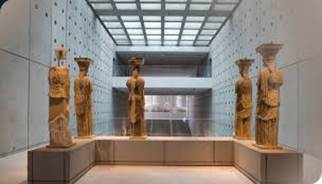 The building had two porches. The roof of the north porch was supported on six Ionic columns, while below its floor the Athenians pointed at the mark of the thunderbolt sent by Zeus to kill the legendary King Erechteus. At the south porch, which was the most well-known, the roof was supported by six statues of maidens known as the Caryatids, instead of the typical columns. Below it stood the grave of Kekrops, another legendary King of Athens. A building inscription of the Erechtheion refers to the Caryatids simply as Korai (maidens), while the name Caryatids was assigned at a later time. The second Korai from the western section was removed by Lord Elgin in 1801 and is today located in the British Museum.

Several interpretations about the Caryatids have been put forth. The most convincing one supports the view that they constituted the visible portion of the grave of Kekrops and were the choephoroi who paid tribute to the glorious dead. The main building and the north porch were surrounded by a continuous Ionic frieze decorated with images of gods, heroes and mortals, in scenes related to the ancient cults of the Erechtheion. The figures were separately carved in Parian marble and affixed on slabs of grey Eleusinian limestone.

The exhibition concludes at the north side of the first floor gallery. Reliefs of Athenian decrees, impressive portraits, Roman copies of classical masterpieces and depictions of philosophers and historical figures are the exhibits covering the period from the 5th century BC to the 5th century AD. These collections of the Museum include the Sanctuary of Artemis Brauronia, the votives of the Classical and Hellenistic Periods and the votives of the Roman Period. 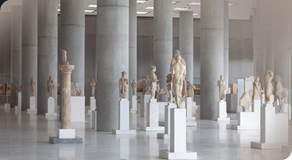 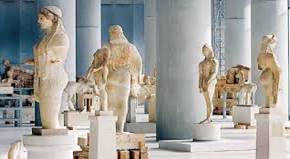 Numerous statues were placed on the Acropolis, which represented gods, heroes, mythological themes and portraits of famous men. They were often works of well-known sculptors, dedicated by cities, rulers or even citizens. Few have survived and usually in poor condition. Moreover, from the mid-5th century BC stelai were also erected on the Acropolis. These were inscribed with decrees of the Parliament and the Public Assembly of the Athenians. The inscriptions on the stone were the publication of the original records which were written on papyrus or wooden tablets. The decrees are divided into two categories, depending on their content: a) Athenian treaties or alliances with other cities and b) honorary decrees for individuals who had offered services or benefactions to the city.

The tour will continue walking to Ancient Agora of Athens. 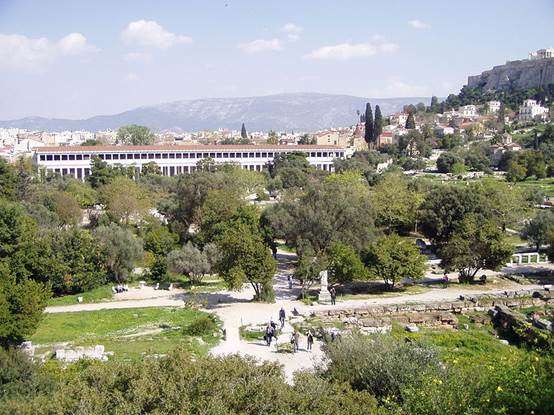 Initially, from the prehistoric period (3500 BC), it was area of inhabitation and landfill while it acquired its subsequent use as a public space, within the meaning of the word (Agora <= collect), from the 6th century (BC) and then, to reach its final form on the 2nd century (AD).

Ancient Agora of Athens was destroyed and looted several times by the Persians in 480 BC, later by the Romans under Sulla in 86 BC, then by the Herulus in 267 AD, and Slavs invaders in 580 when finally this area was abandoned.

In the 10th century the area was re inhabited and around 1000 it was built here a temple of the Saints Apostles. In 1204 there was a new disaster, this time from raids by Leo Sgouros, ruler of Nafplio and followed a new devastation. In the Greek Revolution of 1821 and especially in the period from 1826 to 1827 occurred the last disaster of the area and its surroundings. Thus, the 19th century finds the ancient Agora literally buried beneath densely populated Athens which greeted the king Othon to declare the city as the capital of the newly established Kingdom (1834).

The first excavations of the area of Ancient Agora began in the 19th century by the Archaeological Society and German archaeologists. But systematic archaeological research initiated by the American School of Classical Studies from 1931 to 1941 (a period) from 1946 to 1960 (b period), 1969 (c period) and from 1980 until now.

It is noted that the archaeological site of Ancient Agora of Athens has been operating since 1957, and is currently supervised by the Greek Archaeological Department under the Ministry of Culture.

Then we will visit Plaka, the oldest district not only in Athens but also in Europe. Built in the shadow of the Acropolis, with the Cycladic aesthetics, propitiatory tranquility and the majestic Acropolis directly above that complements, the spectacular view of Athens and Lycabettus Hill are elements, that form the district of the gods as they call Plaka.

Today, the image of the capital has changed, the district of Plaka remains the most “authentic” neighborhood of the city, window in Athens of the past. 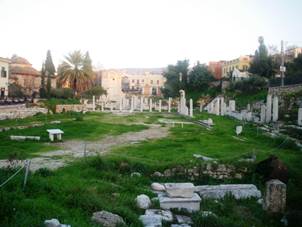 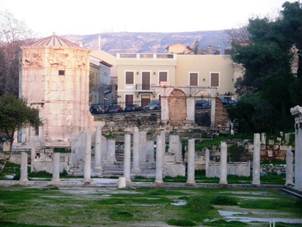 The passage of time from the Neolithic, Archaic, Mycenaean era and afterward the Golden Age and the Hellenistic period, Roman and Byzantine times, the Turkish and the Greek Revolution, where the Athens became the capital of the Greek state Plaka as district has always played a key role in the events of the city, and these signs will find them walking from the Ancient Agora to the Acropolis museum , with a walk is enough to unfold before us the history of the city from ancient times to our days.

Excursion to Ancient Epidaurus and Nafplion

Meeting point for departure will be on the street Filellinon 12, Syntagma (outside the parking), at 8:00 a.m..

On Friday the lucky partners will continue their program with an excursion by luxury bus to Ancient Epidaurus, homonym Theater and city of Nafplion. Among all the ancient theatres, Epidaurus theatre is the most beautiful and best preserved… 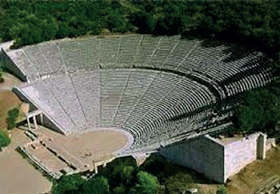 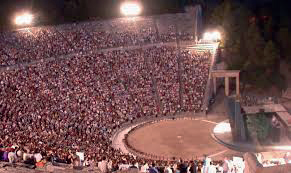 We shall continue to Nafplion or Anapli, a city of Peloponnesus, 140Km far from Athens, capital of Argolida country and the main port of Eastern Peloponnesus. It is one of the most picturesque cities in the country and was the capital of the Greek state in the period of 1828-1833. It has been declared as traditional settlement. 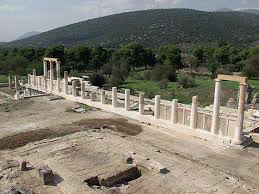 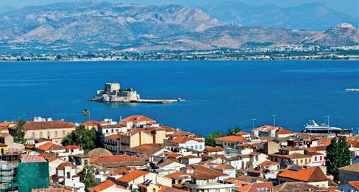 Nafplion is known for Burtzi, a small fortress built on an island in the harbor, for Palamidi, a Venetian fortress which dominates the city, the Acronafplia (in Turkish, Its-Kale), another Venetian fortress, on the homonymous peninsula and the place of the murder of first Prime Minister of Greek state, Ioannis Kapoditrias. 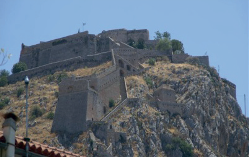 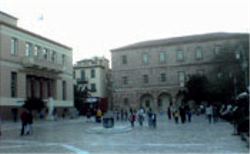 In the most beautiful buildings in the city is the Armansperg Palace (residence of the Viceroy of Greece, Armanspergk) We shall visit the archaeological museum in Syntagma Square and have free time for walking.

After this all day tour out of Athens we shall return to our hotels for some rest because Friday will culminate in a gala dinner for full delegate and their partners at 21:00.